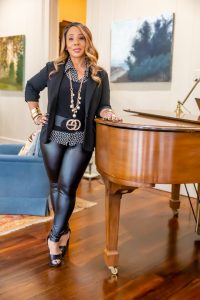 Takenya is the the owner of 504 Degreez, LLC Food Truck in Alexandria, Louisiana.

Takenya holds a BA in Criminal, Masters in Business and a Masters in Social Work and is a Licensed Clinical Social Worker and Substance Abuse Counselor. In the past, she has been recognized as one of Cenlas Top 20 under 40. Kenya is very self driven and always looking for business opportunities.

Keneshelia Smith is a native of Alexandria, LA and is also a graduate of Peabody Magnet High school. She joined the military after high school and served in the United States Air Force oversees and abroad.  She is married to Raymond Smith Jr.  and together they have three children Gabrielle, Nathan, and Leslie.  While serving in the Military, she went through extensive training at Patrick, Air Force Base in Florida on how to deal with sexual harassment and discrimination in the Air Force.

While performing as a Military Equal Opportunity non-commissioned officer, she was required to Plan, organize, and direct Military Equal Opportunity (MEO) activities.  She developed MEO and other related education programs.  She performed administrative functions including but not restricted to preparing reports, analyzing program statistics, and initiating and maintaining case files.  She Identified existing and potential equal opportunity and other human relations issues, advised and assisted commanders, supervisors, and personnel with possible solutions in resolving MEO concerns.  She also conducted briefings, lectures, group discussions, seminars to improve an organization’s human relations climate.  She helped to educate, monitor the Affirmative Action Program and conducted climate assessments for military and civilian personnel.  She also completed Leadership and Management training through the Air Force where she learned techniques, and practical application of leadership such as problem solving, stress management, concepts of human behavior, standard of discipline, and effective counseling techniques.

Upon her separation from the military she became a full time mom and also very active in her local church community where she assisted in the Women’s Ministry assisting women with various issues, hosting events, and teaching, she also served as youth minister alongside her husband, received a teaching certification, her paralegal degree and finally she went back to school to obtain her real estate license.